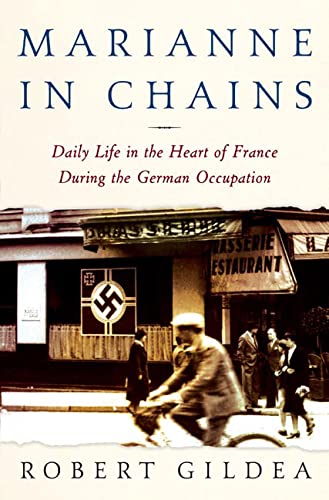 MARIANNE IN CHAINS: Everyday Life in the French Heartland Under the German Occupation

Oxford historian Gildea examines the gamut of French responses to the Nazi occupation of WWII, combining archival research with interviews of some 50 ordinary men and women who survived the war in the Loire Valley. These individuals range over the entire political, religious and social spectrum of France during the occupation. Gildea is especially interested in the creation of postwar narratives about the occupation—attempts to organize memories around such themes as the noble resistance hero confronting the brutal invader or the opposite narrative of pervasive collaboration by the French. Gildea says that after the liberation, right-wing Catholics, Gaullists, the displaced bureaucrats of Vichy, the few surviving Jews and the Communists all competed for control of the occupation's history. In fact, his research shows, events during the war were not as clear-cut as the postliberation myths suggest. Instead, rather than being all heroes or all collaborators, the French had to improvise, playing an intricate (and increasingly dangerous) double game of impressing the Germans as cooperative while carving out as much autonomy as possible as conditions changed. Overall, Gildea sees the French as creative and flexible, with interest groups such as industrial workers or farmers devising strategies and building networks for self-protection. The horizons of people's loyalties shrank from the nation as a whole to the factory, the village or the family. The strength of this book lies in the author's appreciation of the complexity of people's behavior under pressure. Delving behind the postwar stereotypes, Gildea () reveals the myriad paths ordinary French citizens took to survive the occupation. 16 pages of photos, 5 maps not seen by .