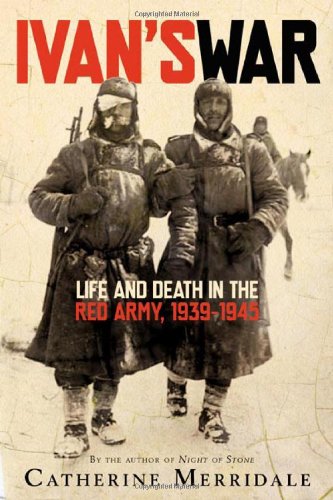 Thirty million men and women served in the Red Army during WWII. Over eight million of them died. Living or dead, they have remained anonymous. This is partly due to the Soviet Union's policy of stressing the collective nature of its sacrifice and victory. It also reflects the continuing reluctance of most Soviet veterans to discuss their experiences—in sharp contrast to German survivors of the Eastern Front. Merridale, professor of history at the University of London, combines interviews, letters and diaries with research in previously closed official archives to present the first comprehensive portrait of the Red Army's fighters. She carefully details the soldiers' age and ethnic diversity, and she puts a human face on a fact demonstrated repeatedly by retired U.S. officer and Soviet military expert David Glantz: the Red Army learned from the experience of its near-collapse in 1941, and by 1945 its soldiers were more than a match for their Wehrmacht opponents. Most poignantly, Merridale reveals that frontline soldiers increasingly hoped their sacrifices would bring about postwar reform—"Communism with a human face." What they got instead was a Stalinist crackdown—and a long silence, broken now by this outstanding book.