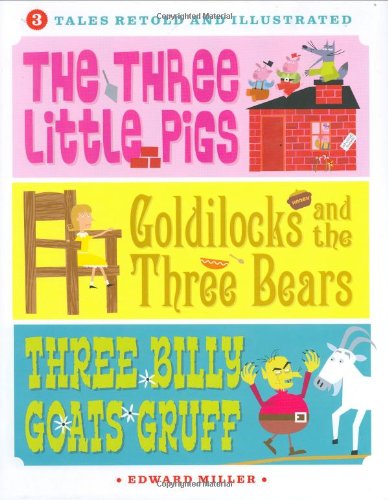 his workmanlike retelling of these three fairy tales breaks no new ground, but its three-in-one format makes it suitable as an introduction to the familiar stories. Miller’s computer-generated artwork resembles stills from a retro Saturday morning cartoon. He includes occasional whimsical touches and tongue-in-cheek visual jokes (Papa Bear holds a newspaper with the headline “ ”), but overall, the flat illustrations lack depth and perspective. Oddly, the noses of many characters are in profile while the eyes face front, so the wolf’s huffing and puffing is pictured as a lump underneath his muzzle. Although not as rhythmical as the originals, Miller’s versions of the stories are nonetheless economically told. Familiar phrases remain intact (“This porridge is too hot!”) but the tales’ gory details have been minimized as much as possible. The wolf simply burps up the two little pigs he’s swallowed and falls through the chimney “into the boiling turnip soup. ” Before she leaves the three bears’ house, Goldilocks helpfully cooks more porridge, mends the chair and helps remake baby bear’s bed. This is a serviceable but not distinguished rendering of three old favorites. Ages 3-7.