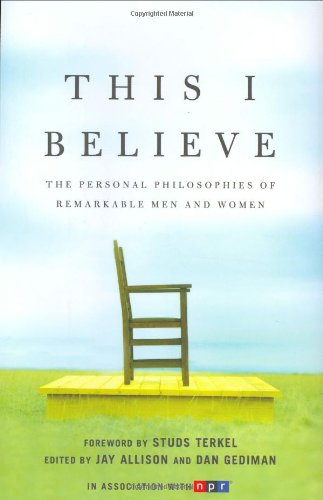 This I Believe: The Personal Philosophies of Remarkable Men and Women

In the 1950s, the Edward R. Murrow–hosted radio program prompted Americans to briefly explain their most cherished beliefs, be they religious or purely pragmatic. Since the program's 2005 renaissance as a weekly NPR segment, Allison (the host) and Gediman (the executive producer) have collected some of the best essays from then and now. "Your personal credo" is what Allison calls it in the book's introduction, noting that today's program is distinguished from the 1950s version in soliciting submissions from ordinary Americans from all walks of life. These make up some of the book's most powerful and memorable moments, from the surgeon whose illiterate mother changed his early life with faith and a library card to the English professor whose poetry helped him process a traumatic childhood event. And in one of the book's most unusual essays, a Burmese immigrant confides that he believes in feeding monkeys on his birthday because a Buddhist monk once prophesied that if he followed this ritual, his family would prosper. There are luminaries here, too, including Gloria Steinem, Warren Christopher, Helen Keller, Isabel Allende, Eleanor Roosevelt, John Updike and (most surprisingly, considering the book's more liberal bent) Newt Gingrich. This feast of ruminations is a treat for any reader.