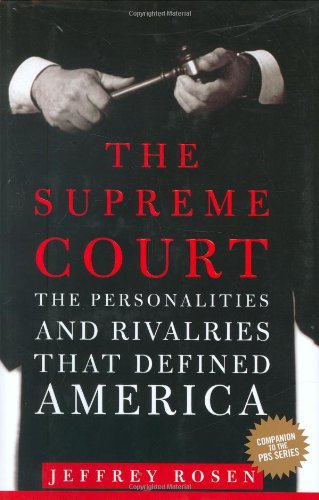 The Supreme Court: The Personalities and Rivalries That Defined America

In his second book this year (after ), Rosen examines how temperament and personal style shape decision making at the U.S. Supreme Court. The author, a law professor and legal affairs editor at the profiles four pairs of contrasting personalities: President Thomas Jefferson and Chief Justice John Marshall; Justices Oliver Wendell Holmes and John Marshall Harlan; Justices William O. Douglas and Hugo Black; and finally Justice Antonin Scalia and Chief Justice William Rehnquist. Jefferson, Holmes, Douglas and Scalia are Rosen's exemplars of judicially counterproductive temperaments: they are ideologues, too invested in promoting the purity of their ideas to exert long-term influence on constitutional law. Far more persuasive for Rosen are Marshall, Harlan, Black and Rehnquist, distinguished by collegiality, willingness to compromise and subordinate their own agendas to the prestige of the Court. Most of the book consists of anecdotes about these eight judges, along with summaries of their most celebrated decisions and brief but perceptive explanations of their judicial philosophies. All this is entertaining, although it dilutes the book's stated focus on judicial temperament. Considering today's Court, Rosen believes Chief Justice Roberts will display a successful talent for consensus-building. As Rosen is well aware, a lot rides on the accuracy of this prediction.