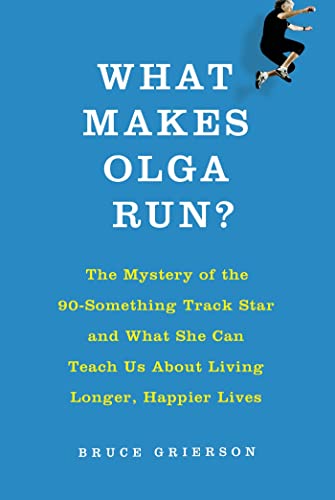 What Makes Olga Run? The Mystery of the 90-Something Track Star and What She Can Teach Us About Living Longer, Happier Lives

Olga Kotelko took up track and field at age 77. Today, she holds 26 world records, setting most of them in 2009, the year she turned 90. Over a four-year period, journalist Grierson (U-Turn) accompanied Olga to meets and practices as well as to appointments with physiologists, geneticists, trainers, and others as they studied Olga's extraordinary achievements. Analyzing everything from Olga's life history, diet and daily routine, to her genetic makeup, brain, personality, bone density, aerobic capacity, muscles, sleep patterns, memory, and more, they found that although Olga is an outlier, there could be more people like her given the right circumstances. As Grierson explains, studies show how older athletes benefit from having started their sport later in life without the accumulated damage from early overexertion, and highlights conditions that worked in Olga's favor%E2%80%94her active childhood on a farm in rural Saskatchewan, the way she has always integrated movement into her everyday life, and her intuition about her body. The middle-aged, fairly sedentary Grierson compares his exercise routines and his DNA to Olga's, portraying their growing friendship as he describes the mysteries of longevity and extols the benefits of exercise. Grierson's fellow boomers have much to learn from Olga's example, given that scientists now think that longevity is 70%%E2%80%9375% lifestyle and only 25% genetic. (Feb.)
close
Details