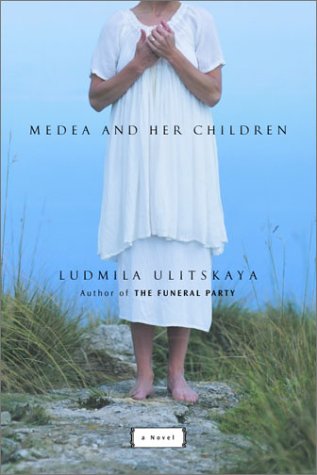 MEDEA AND HER CHILDREN

The members of a raucous extended Russian family trade witticisms, fall in and out of love with the wrong people and try—with mixed success—to make important decisions in this wry second novel by the author of . At the center is the elderly Medea Mendez, the matriarch and "last remaining pure-blooded Greek" of a Crimean family now scattered across the former Soviet Union. While childless herself, in the summer months Medea plays host to her many nieces and nephews, each of them inevitably in the midst of a crisis. Medea's niece Masha discovers the pleasure of adulterous love (permissible because she has an open marriage), but neither sex nor her gifts as a poet can save her from despair. Of course, it doesn't help that she's competing with her own sister for the affections of her summer fling, a circus acrobat turned yoga instructor. Masha's husband, Alik, a talented biochemist, must decide whether to leave his motherland for a lucrative job in America. Ulitskaya also tells the story of Medea's own marriage to a Jewish ex-revolutionary who began his proposal with "you really aren't my type at all." There are plenty of vignettes of Soviet and post-Soviet life, from fixed gymnastics competitions to gossip about who's got what connection and who's father-in-law is a "top bastard in the Party." Ulitskaya's observations are quite funny, though her relentlessly sardonic tone tends to stifle the characters. Still, this colorful, noisy panorama of Russian life is entertaining, and Ulitskaya ties the book's loose ends together slyly.