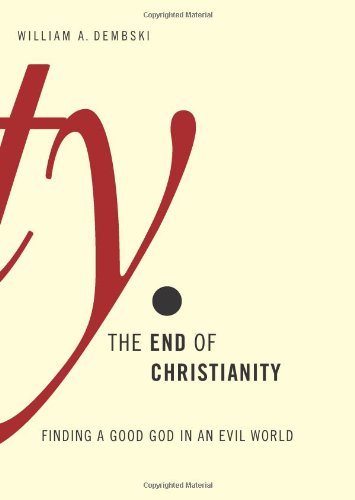 The End of Christianity: Finding a Good God in an Evil World

A high-profile proponent of intelligent design, Dembski ( ), a professor at Southwest Baptist Theological Seminary, turns his attention to the classic theological problem of theodicy. He believes that “God gave humanity two primary sources of revelation about himself: the world he created and the Scripture he inspired.” Dembski develops his thesis to conclude that God created a perfect world until humans sinned. He skillfully traces evil before and after the Garden of Eden to salvation by belief in Christ. He defends his faith not only against atheists (Richard Dawkins in particular), but Jews and other Christians such as C.S. Lewis, John Polkinghorne and Jürgen Moltmann, who don’t view the dark side of human nature as he does. Dembski argues that humans possess free will, but only obedience to an all-powerful God can offer true freedom from evil. In a dense work that draws widely from information theory, scripture and poetry, Dembski’s belief in God as a Creator-Redeemer who saves humankind from evil after the fall is the very personal message of this book.