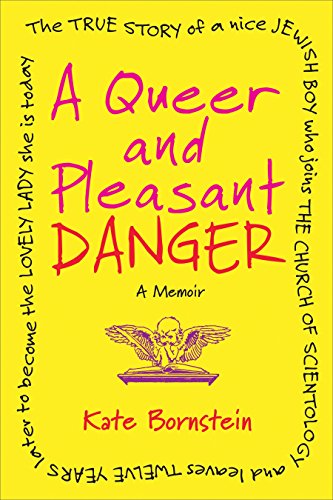 A Queer and Pleasant Danger

Bornstein (Gender Outlaws) is a former Scientology VIP and, for nearly 40 years, a man named Al. Before age five, Bornstein realized “I wasn’t a boy, and therefore must be a girl.” In college, he has sex with women, whom he loves, but also goes for men who make him feel like a girl. This tempest of confusions brings him to Denver, where he finds refuge in Scientology, learning that he’s a gender-free being called a thetan. “The battle of the sexes raged in my mind, day and night. Can you imagine a more appealing theology for someone like me?” For the next decade, Bornstein is blissfully happy with a wife and daughter, and at one point is outranked by only 50 other people in the entire organization. He writes that in 1982, he was excommunicated from Scientology after discovering some private information about L. Ron Hubbard. On his own, he starts therapy, concludes he’s a transsexual, and after living for a year as a woman, changes his name and has reassignment surgery. In the right body, refusing to claim a gender and calling herself a lesbian transsexual, she struggles with rejection from the transsexual, transgender and lesbian communities, but likes the person she is becoming. Bornstein can be a challenging and confusing narrator at times, but is sympathetic in her universal struggle to be comfortable in her own skin and her attempt to come to peace with the paradox that is her life. (May)
close
Details