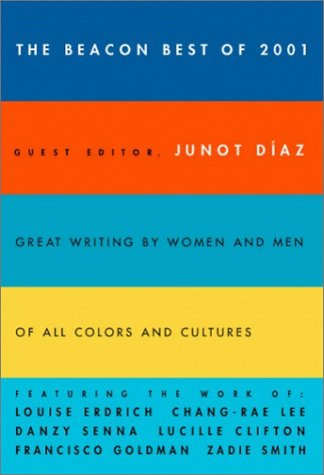 THE BEACON BEST OF 2001: Great Writing by Women and Men of All Colors and Cultures

"I am a 34-year-old black woman, alive at the end of the 20th century and passing for sane. Believe me, that's saying something," writes Felicia Ward in "Good Night Moon," her restrained prose fraught with complex emotions as she describes her disintegrating marriage and her rage at her children. Seeking the "gap... between the Real Story and the Official Story," Dominican-American fiction writer Diaz () culled these 28 selections, primarily by writers of color, from periodicals as diverse as ; ; ; ; and the . Many, like Elissa Wald's "Notes from the Catwalk," are first-person narratives. Wald describes her experiences as a Times Square stripper with bluntness and pungency balanced by emotional nuance. The host at work asks her why she looks sad one night: " 'My cat died this afternoon,' I told him. Incredibly, his doughy face creased into a grin. 'Aw look, honey, don't take it too hard,' he guffawed. 'As long as your other pussy's holding up.' " Sex and/or love are at the heart of many of the pieces—in the 16-line poem "Interglacial," John Frazier describes gay ex-lovers having sex and figuring out what their relationship is about. "How to Do," a poem by Cornelius Eady, begins "It embarrasses my niece to think of her mother/ Walking the street with a cart/ Picking up empties," and describes returning bottles to the local store for food credit. Diaz draws on noted names—Lucille Clifton, Zadie Smith, Louise Erdrich—but many are less well-known. This excellent collection, billed as "the alternative literary annual," is an important addition to the wide world of literary anthologies.