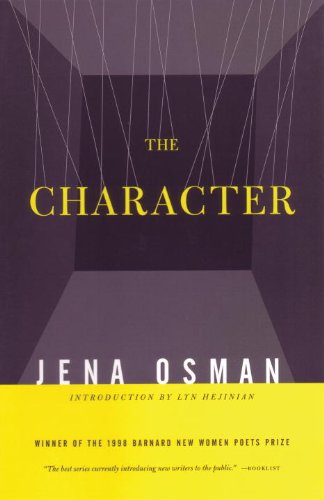 Winner of the 1998 Barnard New Women Poets Prize, Osman presents a complete portrait of the formal interests of postmodern poetry by employing such techniques as the ""page-as-score"" and making use of non-linguistic signs, disjunctive footnotes (and footnotes to footnotes), collage texts (and other surrealist tricks), as well as the self-canceling plays of multiple, gendered identities. Several poems recast a modernist epistemology, like ""The Agrarian"" and the more large-scale ""The Periodic Table as Assembled by Dr. Zhivago, Oculist""--an excerpted hypertext poem partially available at SUNY Buffalo's Electronic Poetry Center, (http://wings. buffalo.edu/epc/). Taking on the myth of modern science's ""objectivity,"" the poem deftly illustrates the interpenetration of atom and Adam; one section, ""Clues for Chlorine,"" imagines the ubiquitous chemical as a noirish soul-double: ""once a detective discovered you/ followed you through your everyday routine/ demanding much of you, perhaps burning your skin/ nothing is private anymore."" As Hejinian writes in her introduction, Osman's conception of ""character"" can include the elements of the alphabet; the ""moral fiber"" of an individual; the unique figure as found in novels and plays; or a cheeky mark of difference, i.e., ""she's such a character."" Despite an often mannered, academic-style rhetoric (""The presence of Iago questions the flawed system. He goes beyond the stance of necessary evil""), as a whole, Osman's debut thrives on the promise of depth without ever surrendering its complete contents, which is, of course, what a ""character,"" in its many manifestations, invariably does. (Apr.)
close
Details