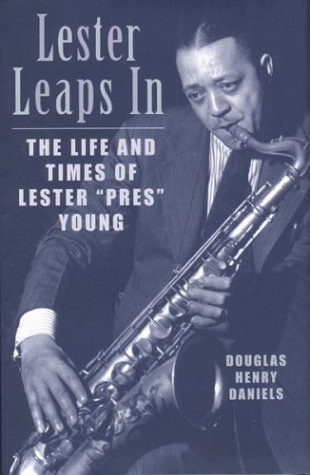 LESTER LEAPS IN: The Life and Times of Lester "Pres" Young

Saxophonist Young dodged most everyone and made a sport of eluding interviewers and outsiders with his brand of elliptical jazz slang (one club owner cranked up a fan after Young said, "You're smotherin' me"). As a writer for wrote just after Young's death in 1959: "No one really knew the true Lester." This makes Daniels's book all the more impressive. By interviewing for the first time many of Young's relatives, friends and band mates, while also examining and challenging virtually everything written about the man, Daniels () adds a layer of understanding to an enigmatic figure. Throughout, the author, a professor of black studies and history at the University of California, Santa Barbara, offers a balanced portrait of a shy, sensitive man whose relaxed onstage persona masked an uneasy loner. The first two-thirds of the book focuses on Young's rise, beginning with his strict musical training and upbringing in his father's traveling minstrel show to his mythic duel against heavyweight Coleman Hawkins in a Kansas City nightclub and landing the lead tenor spot in Count Basie's Orchestra. The remainder is dedicated to Young's life post-1945, the year in which he was dishonorably discharged from the army for marijuana possession. While many critics nail this as the turning point in Young's career, Daniels encourages the reader to revisit the later works, which kept changing and drawing more fans until his death, at age 49, from drinking. This is a wonderful writing of his life.