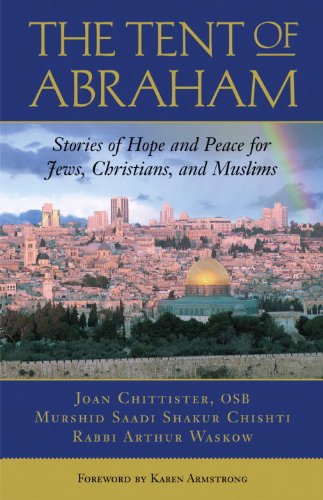 The Tent of Abraham: Stories of Hope and Peace for Jews, Christians, and Muslims

The three coauthors, representing the three major Western faiths (Judaism, Christianity and Islam), explain each religion's basis for a monotheistic multifaith movement by delving into ancient stories. Waskow, a rabbi, offers intellectual perspective on the Abrahamic story, explaining symbolic themes of Judaism. The Torah, for instance, is said to have been written with "black fire on white fire": The white fire is the blank spaces, where Jews of each generation are meant to read and reread the language contained in the black fire. Catholic sister and popular writer Chittister describes the Middle East conflict with compelling anecdotes from her own firsthand experience in founding an Israeli-Palestinian women's group. Finally, Sufi writer Chishti discusses the spiritual content and opinions related to Islam. The authors explore provocative questions, such as which son Abraham meant to sacrifice (Isaac, ancestor of the Jews, or Ishmael, ancestor of the Muslims) and the nature of the relationship between Sarah and Hagar: were they devoted friends, rivals or simply property of Abraham? Evoking the "open tent" policy of Abraham, who welcomed all visitors to his home despite social mores, the coauthors air out all options.