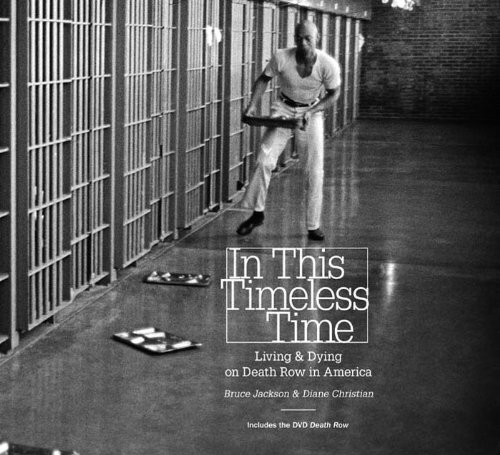 In This Timeless Time: Living and Dying on Death Row in America

In this comprehensive, well-crafted book, published in association with the Center for Documentary Studies at Duke University, SUNY-Buffalo professors Jackson and Christian build upon the photographs and interviews from death row in Texas that yielded their 1979 book and documentary Death Row (DVD included). Here, photos and text reveal inmate life, discuss capital punishment, and share the fate of each man: execution, a commuted sentence, parole, or after more than two decades, an innocent verdict. Organized into three sections (“Pictures,” “Words,” “Working”), 113 duotone photos form the bulk of the book: Jackson’s original black-and-white images from the 1970s show mealtime, exercise rituals, and inmates socializing in the dayroom and passing time in their cells, with detailed captions about the procedures and inmates’ lives. The images speak to the boredom and sameness marking death row, though they lack the punch of Danny Lyon’s seminal photographs documenting the Texas prison system in the early 1970s. However, striking moments, such as subsection “Hands and Mirrors,” reveal the prisoners’ loneliness to palpable effect. While the repetition of images from the same scene, or single subjects shown from different angles, diminish the overall impact, the book raises important questions about the judicial system and the practice of capital punishment in our society. (Apr.)
close
Details