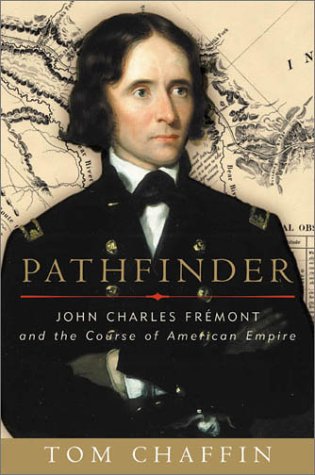 PATHFINDER: John Charles Frémont and the Course of American Empire

John Charles Frémont (1813–1890), nicknamed "the Pathfinder" in recognition of his groundbreaking expeditions to map the American West, is not as well known as Lewis and Clark, but with this superb biography, the reader is soon convinced that Frémont's life is well worth examining, not only for its dizzying ups and downs but also for its intersection with so many hugely important themes in the nation's history: Manifest Destiny, the settlement of the West and displacement of Native Americans; the building of the railroads; and the corrosive debate over slavery. Chaffin's masterful grasp of storytelling creates a deeply nuanced portrait of a man of many parts—dashing explorer, businessman and politician—and the tumultuous times he lived through and helped shape. There's something here for every history buff: gripping accounts of Frémont's expeditions to map the rugged terrain of the West; insightful portrayals of Frémont's allies and adversaries that reveal the author's deep understanding of how power is wielded in both political and nonpolitical settings; and superb analysis of the philosophical underpinnings of American empire. Chaffin (director of Emory University's Oral History Project) even delivers a memorable love story—the relationship between Frémont and his wife, Jessie, daughter of powerful Missouri Sen. Thomas Hart Benton—that could easily stand on its own. 21 b&w illus., 4 maps not seen by .