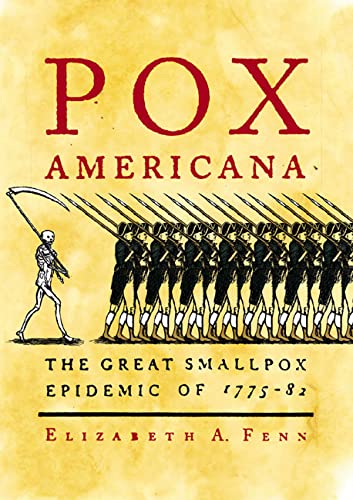 In this engaging, creative history, Fenn () addresses an understudied aspect of the American Revolution: the intimate connection between smallpox and the war. Closed-in soldiers' quarters and jails, as well as the travel demands of fighting, led to the outbreak of smallpox in 1775. George Washington ended an outbreak in the north by inoculating American soldiers (the colonists had a weaker immune system against smallpox than the British). Indeed, Fenn makes a plausible case that without Washington's efforts, the colonists might have lost the war. Despite the future president's success at "outflanking the enemy" of smallpox, however, the disease spread on the Southern front, where there was "chaos, connections, and a steady stream of victims." Even as the war ended, the increased contact between populations spread the disease as far as Mexico and the Pacific Northwest. The outbreak eventually killed an estimated 125,000 North Americans—more than five times the number of colonial soldiers who died (to her credit, Fenn admits that these numbers are inexact). Along the way, Fenn, who teaches history at George Washington University, recounts the fate of many blacks freed under a British "emancipation proclamation" of sorts; promised their freedom if they fought for the British, several thousand ex-slaves perished from smallpox. She also traces the disease's effect on the North American balance of power by devastating some Native American tribes in the 1780s. Long after the war, whites kept Native Americans passive with explicit threats of infection. Fenn has placed smallpox on the historical map and shown how intercultural contact can have dire bacterial consequences. 38 b&w illus. not seen by .