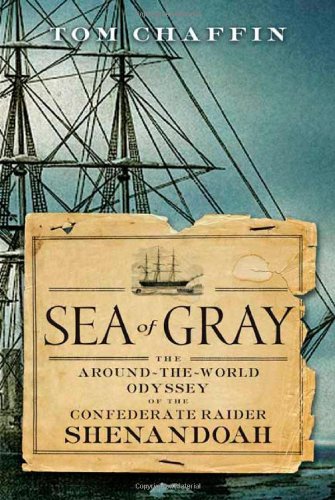 Sea of Gray: The Around-the-World Odyssey of the Confederate Raider Shenandoah

When the Union navy blockaded Southern ports during the Civil War, the Confederates dispatched commercial raiders to prey on private Union ships. One of these raiders was the C.S.S. , a British auxiliary steamer purchased by Confederate agents and refitted as a man-of-war. Chaffin ( ; ) recounts the 's round-the-world journey in a compelling narrative based upon Civil War–era logbooks, journals, letters and memoirs. Commissioned to lay waste to New England's Pacific whaling fleet, the sailed from Liverpool in 1864. Thirteen months and 58,000 miles later, it sailed back. Along the way, the ship survived storms, ice jams and a near mutiny while capturing 40 Union vessels, taking 1,053 prisoners and destroying cargo valued in 1865 at $1.4 million. En route to the Bering Sea when the war ended in April 1865, the continued to fight until June for lack of " 'reliable evidence.' " Thereafter, it dodged capture as it raced for the safety of a British port. Sure to satisfy Civil War and nautical fans, Chaffin's history describes these adventures in gratifying detail.