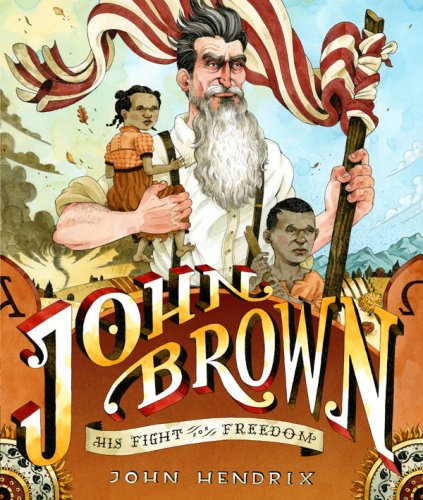 John Brown: His Fight for Freedom

This unflinching biography by illustrator Hendrix ( ), his first as author, begins with a lucid summary of the antislavery movement, pre–Civil War politics and Brown's early activities in the underground railroad. With the massacre of proslavery settlers at Pottawatomie Creek, Hendrix zooms in closer to reconstruct the abolitionist's transformation into an outlaw (“John's ruthless tactics spread fear into the hearts of the Border Ruffians and others, but also branded John a crazed madman”). The violent raid in Harper's Ferry, Va., leads to Brown's arrest and execution and is the climactic event of this compelling narrative. In an author's note, Hendrix opines why Brown should be admired as visionary, not villain (“Terrorists crave destruction and turmoil, and the seed of John's rebellion was compassion”). An aptly polarized palette of saturated amber and blue acrylic washes with pen and ink lends the folk hero's tale hyperbolic splendor (in one memorable spread Brown metamorphoses into a tornado). Hand-hewn, period-fashion fonts spell out Brown's pronouncements and biblical quotations, underlining his convictions. A strong introduction to Brown's controversial legacy. Ages 8–12.