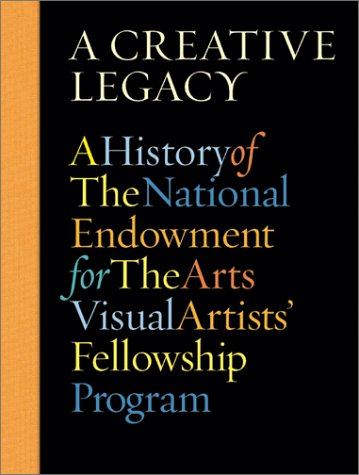 A CREATIVE LEGACY: A History of the National Endowment for the Arts Visual Artists' Fellowship Program 1966–1995

In 1996, Congress cut funding for the NEA's Visual Artists Fellowships program, which had given grants to individual artists to pursue particular projects. Soon after, Dowley, president of the Berkshire Taconic Community Foundation in Massachusetts and director of museums and visual arts at the NEA from 1994 to 1999, sent out a list of the then 4,500 fellowship recipients (there were eventually more than 5,000) to 14 curators and museum directors, asking them to choose 100 who best represented the program. The result is this book, put together with Princenthal, a curator who has published in and elsewhere. Much of the work, shown in 293 illustrations (100 in full color) and discussed in essays from the two editors, is terrific: Richard Tuttle's 1998 , a painting of Native American–like shapes on fir plywood; Bruce Nauman's creepy 1988 animating a hot-cast menagerie; Carrie Mae Weems's 1998 multimedia installation—these pieces are joined by work from lesser-known artists like Gillermo Gomez-Pena and Judy Pfaff, as well as the more familiar Alice Neel and Edward Ruscha. Current NEA chair Ivey carefully discusses the program's contributions to the arts and artists' careers, while appendices include a full chronology of recipients and the program's staff, along with its policies. A lot of it is inside baseball, but the stakes remain high enough that many outside the contentious art world are likely to still care.

Visionaries and Outcasts: The NEA, Congress, and the Place of the Artist in America