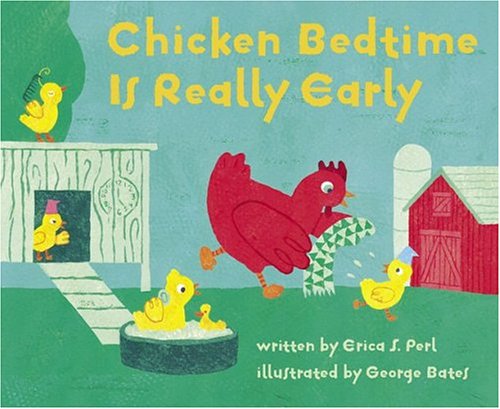 In this first book for both Perl and Bates, bedtime is a fluid concept. For chickens, lights out is 6 p.m.—hence the title. Fish hustle their young ones off to bed at nine and still meet with considerable resistance: "Then some of the little fish sons and fish daughters,/ Ask, 'Why can't I have just one more glass of water?' " Then there's hamsters, who really march to a different circadian drummer—achieving "their hamstery best" at midnight, and falling asleep when the rest of the world is waking up. Working with a warm, jewel-toned palette, Bates (a veteran graphic designer), gives his pictures the nubby texture of paper towels; the homespun effect makes his cast of stylized, slightly goofy animals (which also includes cows, sheep, rabbits and frogs) all the more endearing. Kids and adults alike will get a kick out of the visual jokes: a chick conscientiously flosses its beak, a bleary-eyed rabbit parent clutches a morning cup of coffee. As for Perl's versifying, it's perfectly pitched for young ears, combining puns ("No more carping!" the fish dads warn their recalcitrant offspring), simple rhymes, silly words and repetition to achieve a satisfying snappiness. It's hard to imagine lines like "It's time for each one of the buns-dads and mommies,/To put their young rabbits in footy pajamies" wearing out their welcome anytime soon. A double debut that's double the fun. Ages 3-6.