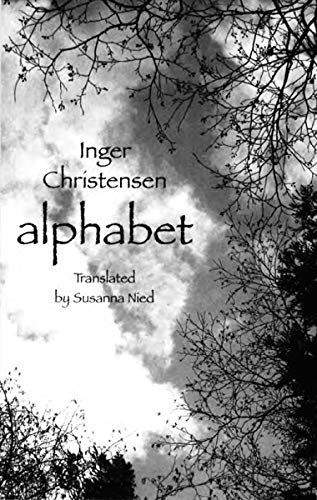 One of Scandinavia's most honored poets, veteran Danish writer Christensen originally published her book-length Alphabet 20 years ago to great acclaim; this translation by former San Diego State Univ. English instructor Susanna Nied is the first in English and was awarded the American-Scandinavian PEN translation prize. The lengths in lines of each of this slim volume's 14 poems from ""[a]"" to ""[n]"" are based on the Fibonacci sequence. Beginning with zero and one, the sequence runs 0, 1, 1, 2, 3, 5, 8, 13, 21, 34, 55, 89, 144, 233, 377, 600; ""[a]"" begins where (0 + 1 = 1). One assumes the 977 lines ""[o]"" would have required finally overwhelmed the poet and forced her to stop at [""n""]; Ron Silliman's similar alphabetic project makes no such allowances. As used here with controlled repetitions, the sequence gives the whole an almost medieval sense of restriction, as in the last four lines of ""[e]"": ""afterglow exists; oaks, elms,/ junipers, sameness, loneliness exist;/ eider ducks, spiders, and vinegar/ exist, and the future, the future."" Abstracted cold war fears and post-'70s ecological concern and alienation give way to litanies of real world outrages ""chemical ghetto guns exist/ with their old-fashioned, peaceable precision// guns and wailing women, full as/ greedy owls exist; the scene of the crime exists"" which culminate in a post-nuclear holocaust nightmare, with birds and children somehow having survived in caves. The scenario may seem dated, but the threats remain very real, and Christensen's poetic appeal for sanity and humanity remains an abstracted call to action. (Apr.)
close
Details