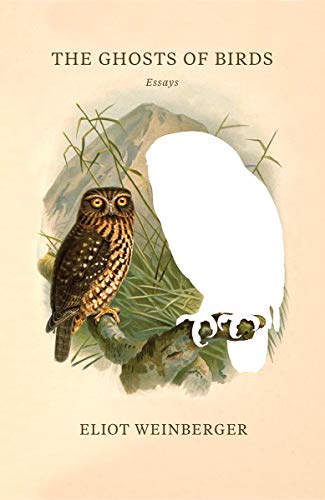 The Ghosts of Birds: Essays

This slim volume from Weinberger (The Walls, the City, and the World), a prodigious translator, editor, and author, provides abundant rewards for readers in essays that are short, dense, and rich with meanings and ideas. The selections display an aesthetic of distilled prose and a fascination with poking at the seams between reportage, fiction, and poetry. The book is separated into halves, the first of which is a sort of addendum to Weinberger’s haunting, meditative 2007 An Elemental Thing. In these new pieces, Weinberger discusses history, nature, and mythology—among other things—and interrogates the traditional form and function of the essay. He opens with a chapter dissecting the story of Adam and Eve, and from there casts a wide net over topics including dreams, American mythologies, and a cultural taxonomy of stones. The second section of the book contains more traditional essays, some looking at particular works, and several in the more experimental vein of the first half. Of particular note are his essay on indigenous Mexican poetry and his notorious 2010 review of George W. Bush’s memoir Decision Points, entitled “Bush the Postmodernist.” The latter is a withering piece of prose that manages to be simultaneously hilarious and horrifying, as acute a look at the 21st-century American condition as any produced to date. (Oct.)
close
Details