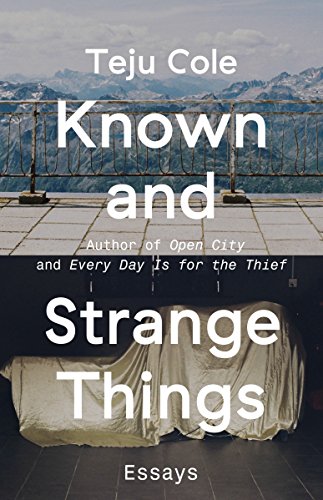 Three experiences structure this first nonfiction collection from novelist Cole (Every Day Is for the Thief). The first section, “Reading Things,” offers appreciations of writers, among them Tomas Tranströmer, Sonali Deraniyagala, André Aciman, Ivan Vladislavic, and, especially, W.G. Sebald, whose work raises the same ethical questions Cole asks time and again. The second, “Seeing Things,” explores the work of visual artists, primarily photographers, from places as different as Mali, Russia, France, and South Africa, and casts keen-eyed scrutiny upon photography itself. Cole’s tripartite structure concludes with “Being There.” Throughout, Cole forges unexpected connections, as in “Unnamed Lake,” in which, over the course of one sleepless night, his mind wanders over different historical moments: a Nazi performance of Beethoven at the opening of the extermination camp in Belzec, Poland (1942); the death of the last Tasmanian tiger (1936); a military coup in Nigeria (1966); a ferry disaster in Bangladesh (2014); and the atomic bombing of Nagasaki (1945). Cole is a literary performance artist, his words meticulously chosen and deployed with elegance and force. To read, see, and travel with him is to be changed by the questions that challenge him. As he observes of one writer, “The pleasure of reading him resides in the pleasure of his company”; the same may well be said of Cole. [em]Agent: Andrew Wylie, Wylie Agency. (Aug.) [/em]
close
Details