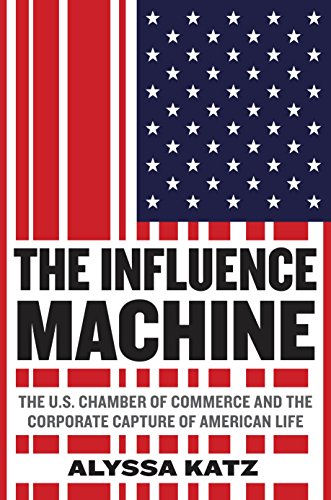 The Influence Machine: The U.S. Chamber of Commerce and the Corporate Capture of American Life

With clarity and verve, but without polemic, investigative journalist Katz (Our Lot) describes the U.S. Chamber of Commerce’s evolution into a many-armed behemoth. Katz credits the group’s impressive and increasing influence over national politics to its ambitious CEO, Tom Donohue, who has turned the tax-exempt entity into “Washington’s most powerful lobbying machine.” Some readers will feel disheartened, others awed, by Katz’s account of how, acting on its pledge to curb government growth, the Chamber of Commerce has tirelessly obstructed consumer protections, environmental regulation, financial reform, and health care legislation. Strong on journalism if lighter on analysis, Katz illustrates with several examples of how the organization has managed to influence courts, strong-arm Congress, cripple federal agencies, and sway the public with “voter education” ads—and, more recently, it has exported cutthroat American business practices abroad. Katz suggests that the Chamber of Commerce’s true commitment, despite its public-spirited rhetoric, is to deep-pocketed and anonymous legacy polluters, like the coal, tobacco, and chemical industries. While the book ends on an optimistic note, encouraging other, more public-spirited organizations to learn from the Chamber of Commerce’s path to power, readers might wonder if the Goliath described by Katz is simply too big to fail. Agent: Larry Weissman, Larry Weissman. (July)
close
Details