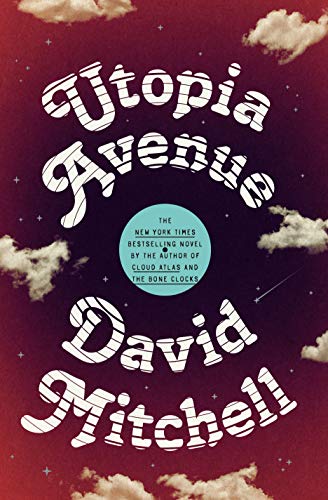 Mitchell’s magical, much anticipated latest (after Slade House) is a rollicking, rapturous tale of 1960s rock ’n’ roll. Utopia Avenue emerges from the London music scene as a ragtag band of four unforgettable characters, assembled by manager Levon Frankland as a “psychedelic-folk-rock” supergroup. There’s Jasper de Zoet, the dark and enigmatic lead guitarist; Elf Holloway, the ethereal songstress on keyboards; Griff Griffin, the gruff but lovable drummer; and Dean Moss, heartthrob bassist and lead singer. Dean, who escaped poverty and his abusive father, turns to music as his outlet of expression. De Zoet seeks a dangerous escape from his schizophrenia in a mystical “psychosurgery” treatment. Meanwhile, Griff, a “drummer-of-many-parts” according to the Village Voice (“Sounds as if my arms and legs unscrew,” Griff says), is the glue that keeps them together, and Elf circuitously navigates her sexuality and eventually finds a surprising new love. From dingy nightclubs to the Chelsea Hotel and room service in California, and cameos from Janis Joplin, Jerry Garcia, and members of the Rolling Stones, Mitchell follows the band’s sex- and drug-fueled rise to fame in 1968 and the group’s abrupt, heartbreaking end. Each chapter name is the title of a song and focuses on one of the main characters in the band, and Mitchell unspools at least a dozen original song lyrics and descriptions of performances that are just as fiery and infectious as his narratives. Mitchell makes the best use of his familiar elements, from recurring characters to an innovative narrative structure, delivering more fun, more mischief, and more heart than ever before. This is Mitchell at his best. (June)
close
Details