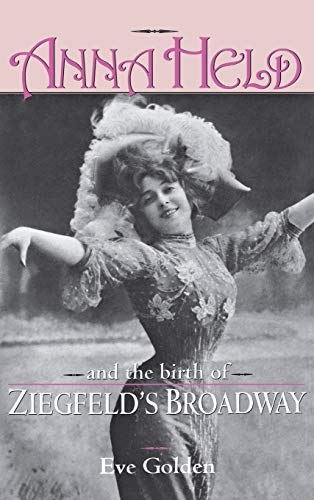 Thanks to the Ziegfeld Follies, a wildly popular string of revues from the early 1900s, the name of Florenz Ziegfeld Jr. is familiar to many theater devotees. Somewhat less well known, however, is Anna Held, a musical performer who blazed brightly in those early days of Broadway--and who for many years was Ziegfeld's common-law wife. In this extravagantly entertaining biography, Golden places Held squarely center stage--in a colorful career that spanned more than 20 years--while painting a meticulously detailed portrait of the dawn of the last century. Dishy show-biz gossip (much of which strikes such a note of d j vu that it might well come from today's star-glazed 'zines) is smartly placed within a serious but never dry framework that incorporates historical events and society's evolving mores. The abundant use of newspaper articles, critics' reviews and excerpts from Held's many interviews draws the reader into the scene. Though Held was known as a Parisian, she was in fact from Warsaw, born probably in 1870. (Like many figures in the entertainment world, Golden notes, ""Anna Held's birthdate and hometown are a dark mystery, thanks to her own mythmaking."") Her early years were spent in Paris and London, where she began her theatrical pursuits. In 1896, the impresario Ziegfeld sailed for Europe to scout new talent; when he encountered Held at London's Palace Theater, ""it was like nitro meeting glycerin for the first time."" In the words of a later Ziegfeld star, Eddie Cantor, ""For a generation, America succumbed to the Anna Held craze."" So too will readers succumb to her vibrantly told tale. 69 b&w photos. (Apr.)
close
Details