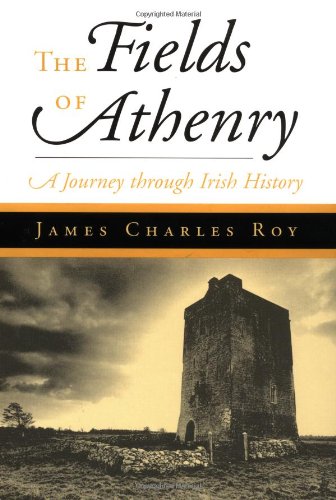 THE FIELDS OF ATHENRY: A Journey Through Irish History

James Charles Roy, Author THE FIELDS OF ATHENRY: A Journey Through Irish History

This is a book within a book. One book comprises the tale of how the author bought a crumbling tower in Moyode, County Galway, and eventually restored it. The second book is a history of Ireland, and of the local community in particular. Roy purchased Moyode Castle in 1969 for a mere £800, but as he lives in Boston, he took his time refurbishing. Along the way, as he relates the tale of the castle, we are introduced to all who have rambled the local territory through its history, from the blatantly sexual Celts of earliest times to the Normans of the 11th century ("illiterate savages"), to the followers of Cromwell who took his saying, "To hell or Connaught," to heart, and up to the Black & Tans of 1921. Roy's portrait of Ireland is somewhat dated since it is set in the 1980s and early '90s, before the Irish economic miracle, known as the "Celtic Tiger," fully blossomed. But it does highlight many things that have changed in Ireland over the last 20 years: the declining influence of the Catholic Church, the demise of pub life and the oral tradition ("The death of old Ireland... will be completed in the next twenty years or so by the television set"), and the increasing influence of the EEC. But the element of the story that will tickle most readers is Roy's daily give-and-take with barmen, workmen and farmers. His struggles with builders become legend ("In Ireland, if you don't watch it you can be skinned alive"); his encounter with tinkers, Irish gypsies now known as "itinerants," will amaze the uninitiated; and his battles bargaining for stone walls and slate roofs are all thoroughly amusing. Readers will find Roy (; etc.) and this book the way the ancient Romans viewed the Celts: "high spirited and quick to battle, but otherwise straightforward and not of evil character."