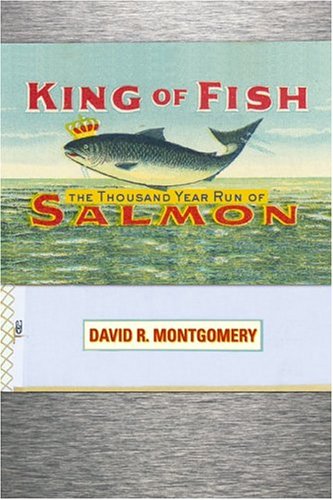 KING OF FISH: The Thousand-Year Run of Salmon

Drawing on a combination of scientific, historical, sociological and political research, Montgomery, a professor of geomorphology at the University of Washington, traces the tragic and steady decline in salmon populations in Europe, New England, Eastern Canada and the Pacific Northwest. Using his detailed analysis of the destruction of native salmon runs at each site, Montgomery demonstrates that the decline has been caused by the same four actions: polluting rivers in the name of technology, changing the natural environment by damming rivers and clear-cutting forests, overfishing, and ignoring regulations and laws imposed to help salmon populations recover. Montgomery's history of salmon moves from awe inspiring (their ancestors go back some 40 million years) to heartbreaking ("Lonesome Larry was the only sockeye [salmon] that made it back [to Redfish Lake] in 1992"). But when the book's focus changes from fish to the likes of Queen Anne, King George, Richard Nixon and Gerald Ford, who were all unsuccessful in stopping the salmon's slide toward extinction, Montgomery's tone becomes decidedly bleaker. Though the nature of the salmon's struggle to survive against these recurring threats to its life and habitat causes the book to be somewhat repetitive, Montgomery saves his best writing for the last chapter, where he courageously outlines the scientific evidence surrounding the salmon's plight and presents a no-nonsense plan for the fish's tenuous hope for survival. Photos and maps not seen by .