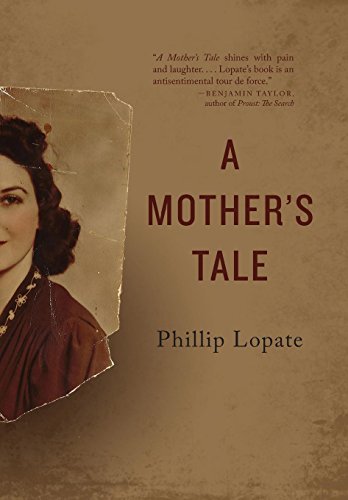 In 1984, Lopate sat down with his mother, Frances, and asked her to tell him her life story, prompting her recollections with questions and interjections of his own. Thirty years later, he discovered the tapes of these interviews and decided to transcribe the conversations to bring his mother’s energetic and vibrant voice to life. “I chose to include so much of her testimony verbatim,” he writes, “because it seemed a more realistic presentation of the person she was, and the dynamic between us.” In a voice that’s alternately rambling and precisely focused, Frances recalls being orphaned and being sent to live with her sister, running away at 15, her marriage, her affairs, her acting career, and motherhood. When Frances calls her husband a “piece of garbage,” her son disagrees, to which she responds with specifics: “He had a low-paying job, he was no bargain, he was a rotten lover.” Looking back on these conversations, Lopate often interjects and reads his mother’s situation through the lens of fiction: “It’s starting to sound like Sons and Lovers... here again is the... woman... horrified by her... husband, and the sensitive son going back and forth between the two.” Their relationship is, of course, complex. In Lopate’s balanced writing, Frances comes across as a strong woman, going her own way in a time when women’s ways were often dictated to them. (Jan.)
close
Details