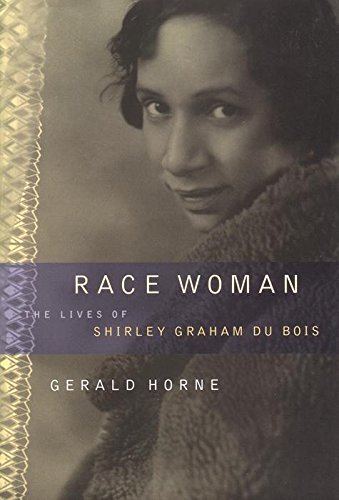 Largely remembered as the widow of W.E.B. Du Bois, Shirley Graham Du Bois (1896-1977) was much more than a faithful caretaker and companion to her legendary husband. As Horne (Fire This Time: The Watts Uprising and the 1960s) reveals in this impressive biography, she was a restless, multifaceted woman. Reared in a strict Calvinist home, the daughter of a minister in Indianapolis, Ind., she understood that a solid education could free her from the limited existence of most women in her time. A youthful excursion into marriage ended in divorce, but not before Graham Du Bois became the mother of two sons. Horne, a Fulbright scholar and professor of history at the University of North Carolina-Chapel Hill, does not judge Graham Du Bois's tortured decision to leave her boys with her parents so that she could conquer the world. After moving to Paris during the wild 1920s, she returned to the U.S. to produce her hit opera, Tom-Tom, then submerged herself in the heady academic atmosphere of Oberlin University. Horne also diligently evokes her political commitment to the civil rights movement, women's rights and anti-colonial struggles in Africa and Asia. Graham Du Bois wanted to control the flow of her life, but all of that changed when she met W.E.B. Du Bois, whom she married in his declining years, while he was under attack from McCarthy's Red hunters. Horne's observations on the couple's final days in Africa in 1963 and Graham Du Bois's subsequent globe trotting, especially her infatuation with Maoist China, are eloquent and rich with telling anecdotes about such figures as Malcolm X, Adam Clayton Powell, Nasser, Nkrumah and Zhou Enlai. Drawing on Graham Du Bois's personal papers and extensive interviews with family and friends, Horne's book may not completely unravel the enigma of Shirley Graham Du Bois, but it gets closer to her heart and soul than any previous attempt. (Sept.)
close
Details