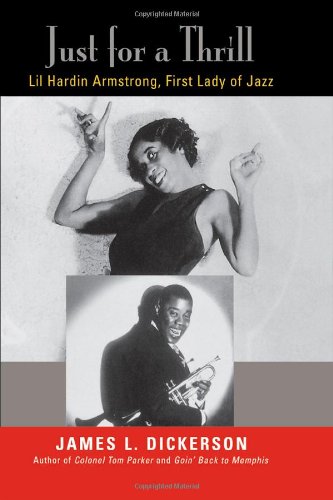 Dickerson () highlights jazz pianist Hardin's considerable but largely forgotten legacy in this well-meaning, meandering account of the "most important woman in jazz history." Hardin (1898–1971), who was playing with Joe Oliver's prestigious King Oliver's Creole Jazz Band by 21, was an accomplished performer, a prolific composer and, by arranging, composing and playing on the bulk of Louis Armstrong's Hot Fives and Hot Sevens recordings, was largely responsible for history's first jazz records. The Hot Fives, in fact, were Hardin's creation, though she opted to promote them under Armstrong's name. Dickerson notes these achievements and others (Hardin held two advanced degrees in music, designed clothing and made the transition to swing vocalist and band leader), but devotes considerable attention to Hardin's once husband and music partner Armstrong; the bulk of the book is devoted to the years Hardin lived and worked with him. While the author is long on praise for Armstrong's playing, his underwhelming descriptions of Hardin's efforts ("steady and squared") seem afterthoughts, and he follows Armstrong's adventures even after their divorce, with just a note or two about developments in Hardin's life. Though intended to provide context, jarring detours like a rundown on Al Capone's mob scene serve only to emphasize the paucity of information about Hardin. In a postscript that may account for the book's distance from its subject, Dickerson explains that after Hardin's death, "vultures" made off with her personal effects, including letters, photos and the manuscript for her autobiography.