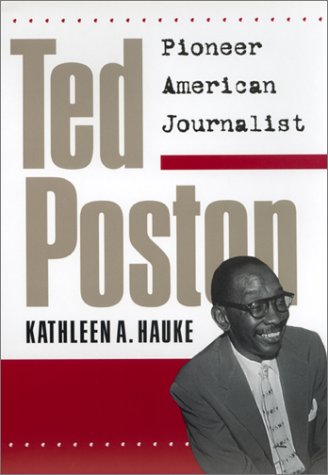 After working as a Pullman porter, a dining car waiter and a copy boy, Ted Poston moved to Harlem at the height of the Harlem Renaissance, in 1928. Seven years later, he was hired by the New York Post and so became the first African-American staff reporter at a mainstream daily. In wonderful detail, through interviews and extensive archival research, Hauke tracks Poston from his childhood in Kentucky through his college education in Nashville (where he shoplifted his suit and hitchhiked to school), from his stint waiting tables in the famous Cotton Club to his immensely popular tenure as a reporter and city editor for Harlem's black newspaper, the Amsterdam News. In Hauke's telling, Poston's accomplishments as a reporter are staggering: he traveled to Russia with Langston Hughes and Malcolm Cowley in 1933 and, upon his return, covered the retrial of the Scottsboro boys from a segregated balcony in Decatur, Ala., because the court refused to recognize his press credentials (he posed as a minister to evade angry locals and surreptitiously passed his dispatches to a New York Daily News reporter in a bathroom stall). He wrote and edited for the Federal Writers Project during the Depression, and, at the Post, covered black culture with unparalleled access to crucial moments of American history. Friendly with porters and politicians alike, Poston wrote about black notables from Father Divine to numbers runners and his neighbor, Thurgood Marshall. In 1940, FDR selected Poston for his ""Black Cabinet"" and Poston remained in Washington to serve as the head of the Negro News Desk for the Office of War Information during WWII. He returned to the Post after the war and traveled frequently to the South to report on the burgeoning civil rights movement, including the first stirrings of King's bus boycott in 1955, the trial of Emmett Till's lynchers and the integration of the University of Alabama. A legendary raconteur, activist, humorist and trailblazing reporter, Poston remains one of the most underappreciated luminaries of the Harlem Renaissance. Hauke's exhaustive biography will do much to reverse that. (Jan.)
close
Details