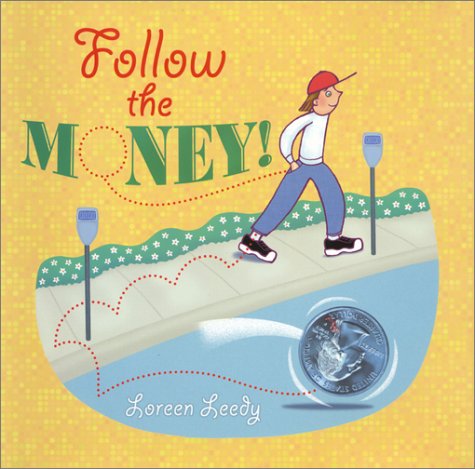 A freshly minted quarter chattily narrates Leedy's () lively look at currency. "Ouch!" complains George as he is stamped at the mint; "Let me out of here!" he yells as the bag holding him and other coins gets loaded onto a truck bound for the Federal Reserve Bank. The quarter's next stop is a local bank, after which his itinerary includes brief stops at a grocery store, a vending machine, a boy's piggy bank and the cash registers of various merchants. Several additional misadventures would flip out any self-respecting coin: George rolls close to a storm drain and, forgotten in another owner's pocket, tours a washing machine while chiming, "Money makes the world go round." Along the way, characters calculate the amounts of their purchases in stores and compute a weekly salary, among other math exercises. Playful mixed-media art, flippant asides from George and other coins, and occasional puns add to the lighthearted tone. An endnote relates ideas and facts about money. Ages 4-8.