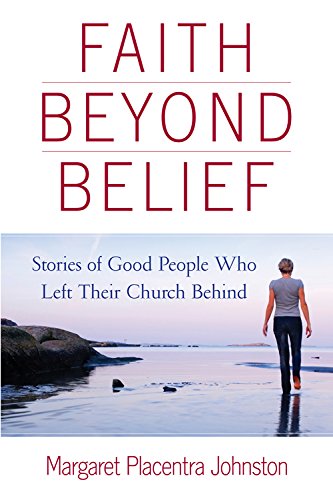 Faith Beyond Belief: Stories of Good People Who Left Their Church Behind

In this thought-provoking first book, former optometrist Johnston, who has studied spiritual development, allies herself with the “beyond religion” movement, in which nonbelievers or those who are “post–organized religion” advance toward spiritual maturity through emotional intelligence, psychology, ethics, and critical thinking outside of traditional religious structures and belief systems. Interweaving personal stories from Catholics, a Mormon, a Muslim, Protestants, and others with accumulated core insights from human development experts, including Abraham Maslow, Lawrence Kohlberg, Gordon Allport, and James Fowler, Johnston identifies five stages of “deconversion” and spiritual growth: Lawless, Faithful, Rational, Rational Plus, and Mystic. Understanding this natural movement, indicates Johnston, may shift the expanding “spiritual, but not religious” demographic toward more satisfying spiritual depths. Describing many religious institutions as “exclusionist, ethnocentric, judgmental, and triumphalist,” Johnston maps a future for religion that is “post-critical,” heterodox, mystery-centered, and teaches moral reasoning rather than doctrinal adherence. Building on what psychiatrist M. Scott Peck’s The Road Less Traveled (1978) and People of the Lie (1983) did for a segment of Protestantism in the 1980s, Johnston may provide similar direction for the postmodern meaning-starved spiritual seekers who are becoming adults in what philosopher Curtis Carter has termed a “transreligious” world. Agent: Lisa Hagan. (Oct.)
close
Details