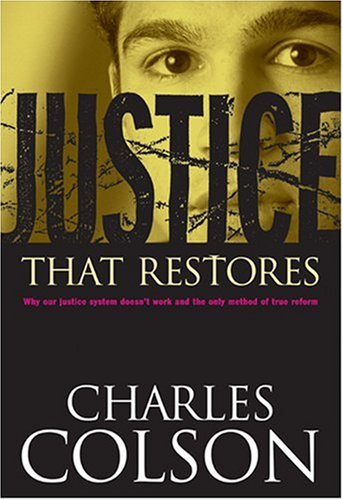 JUSTICE THAT RESTORES: Why Our Justice System Doesn't Work and the Only Method of True Reform

Ostensibly about the justice system, this book is in large part a rehash of the decades-old culture war between the Left and the Right, in which Colson argues that almost all left-of-center assumptions about humanity and God are wrong and dangerous, and that those of the Christian Right are correct. Rife with false dilemmas (e.g., individuals are to blame for crime; their environment is not), Colson's arguments are puzzling, since he targets an audience of evangelicals who are already on his side. More confusing is the fact that in his last few chapters, Colson reveals his support for prison reform initiatives of both the Left and the Right, and in doing so occasionally contradicts himself. For example, after repeatedly bemoaning the futility of therapy as a tool for rehabilitation, he ends the book by praising several programs that have strong therapeutic components. In addition, after arguing that the rising prison population is a valid indicator of a culture increasingly prone to "coarse crimes," he later agrees with scholars who say that only a small minority of inmates are serious criminals. While Colson never fully acknowledges that he agrees with liberal thinkers about anything, he does, for example, gingerly critique some aspects of the war on drugs. The book's anecdotes about Christian-run prisons, community courts and creative sentencing are inspiring and would likely motivate readers of all stripes. Sadly, these stories are footnotes to a diatribe that will appeal to only a narrow audience.