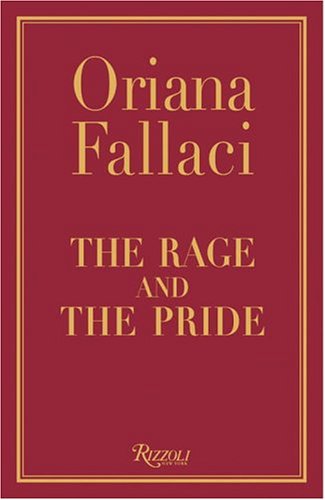 THE RAGE AND THE PRIDE

Noted Italian journalist Fallaci (; etc.) is capable of hard-hitting, trenchant social criticism, but she fails to accomplish that in this impassioned but sloppy post–September 11 critique, which has been a bestseller in Italy and elsewhere in Europe. Fallaci only aggravates her lack of rigorous thinking by translating the work herself, resulting in a clumsy text that appears not to have been edited or proofread by a fluent English speaker. (Whatever resonance "cicada"—her choice term for the "so-called intellectuals" whom she addresses—has in Italian fails to translate into English.) After a melodramatic preface in which Fallaci congratulates herself on her courage in speaking the truth (and in her defense, apparently there have been efforts to ban the book in France), she lights into the European, and especially Italian, "cicadas" who felt that, on September 11, 2001, America got what she had coming to her and who, in the name of political correctness, fail to condemn the "Reverse Crusade" being waged by Islamic zealots like Osama bin Laden. But Fallaci's love for America, her adopted home, and her critique of European intellectuals' perverse contempt for it, is laced with a bile that may lead readers to suspect her of anti-Arab bias—a possibility she is all to aware of, repeatedly defending herself against the charge of racism. Fallaci's "Italy for Italians" diatribe, her ugly portrait of Muslim immigrants as invading and violating her native Florence ("Terrorists, thieves, rapists. Ex-convicts, prostitutes, beggars. Drug-dealers, contagiously ill"), her denial that there is a moderate Islam, will not sit well with American readers, who may wonder why this small book has, in the publisher's words, "caused…a turmoil never registered in decades" in Italy, France and Spain.