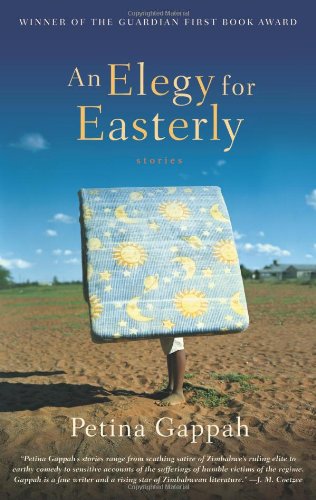 An Elegy for Easterly: Stories

In her accomplished debut, Gappah, a Zimbabwean writer and international trade lawyer, casts her compassionate eye on a diverse array of characters living, grieving, loving—and fighting to survive—under Robert Mugabe's regime. “In the Heart of the Golden Triangle,” the second-person narrative of a wealthy woman's tormented marriage, turns a mirror upon the reader: “You worry because you have not found condoms in his pockets,” the narrator muses of her husband's behavior, “but in the cushioned comfort of your four-by-four, you don't feel a thing.” Meanwhile, in “The Cracked, Pink Lips of Rosie's Bridegroom,” a village ponders a doomed marriage in which the groom, who has a history of “buried... girlfriends,” is clearly marked as being afflicted by “the big disease with the little name.” In “The Mupandawana Dancing Champion,” Gappah sets her sights on political absurdities with a cutting story about a coffin maker with some great dance moves and an unfortunate nickname. Gappah's deep well of empathy and saber-sharp command of satire give her collection a surplus of heart and verve.