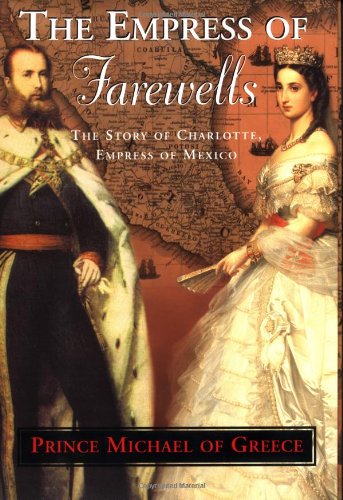 THE EMPRESS OF FAREWELLS: The Story of Charlotte, Empress of Mexico

If there were a truth-is-stranger-than-fiction award for royal biographies, this would surely be a contender. The daughter of Leopold I of Belgium and his French wife, Queen Louise, the bright and beautiful Charlotte (1840–1927) could have had her pick of Europe's eligible royal bachelors. Unfortunately, she settled on Archduke Maximilian, who, as the younger brother of Austrian emperor Francis-Joseph, had no hope of inheriting a throne. So he took up Napoleon III's offer to rule Mexico, a decision that proved to be both his and his wife's undoing. Armed with reams of personal documents and previously unpublished papers, as well as a storyteller's gift for detail, Prince Michael (author of 14 books, including ) highlights not only the political intrigue that threatened mid-19th-century Mexico but the romantic intrigue that threatened the royal marriage and, ultimately, Charlotte's psyche. Max took frequent trips, writing his wife maudlin "I miss you" letters as soon as he was gone. Yet once he returned home, he took refuge in his separate bedroom. Their final separation occurred when Charlotte sailed to Europe to rally support for imperial Mexico facing rebellion. En route to Rome to plead the cause with the Pope, she began a descent into insanity from which she never fully recovered. Meanwhile, her husband was captured and assassinated by rebel forces. Prince Michael has his dramatic pacing down, but his inability to answer key questions—Was Charlotte driven mad by poison or by her husband's lousy treatment of her? Was he gay?—detracts a bit from an otherwise unforgettable story.