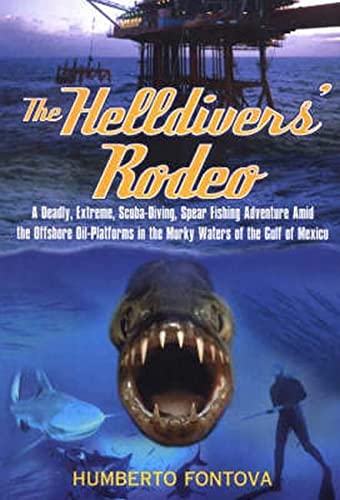 THE HELLDIVERS' RODEO: A Deadly, Extreme, Scuba-Diving, Spearfishing Adventure Amid the Offshore Oil Platforms in the Murky Waters of the Gulf of Mexico

This highly entertaining read follows the adventures of a pack of New Orleans–based middle-aged crazies whose idea of "sport" is hunting dangerous fish near offshore oil rigs. The book is part Hunter Thompson "gonzo"-style tale about "kick-ass, deep-diving, monstrosity-spearing rig divers," and part paean to the fearless diving sportsmen of the 1950s—including a young Jacques Cousteau, who first taught American divers about the "kill zone" at a shark's forehead—who the author sees in the same role as the first men who crossed the Bering land bridge and found virgin hunting lands teeming with unsuspecting prey on a new continent. Fontova provides a fine, detailed history of the pastime that causes 98% of all diving accidents. He artfully describes the birth of the nation's first fishing rodeo, which later introduced a spearfishing division attracting "divers from all over the world" to the fertile waters near and then farther beyond New Orleans. He adeptly depicts the development of technology that allows men to dive to depths below 200 feet; the reasons why grown men band together in small groups—often in competition—and risk the loss of life and limb to see who can capture the biggest fish; and the helldivers' moments of relaxed triumph, which can all be summed up by one of Fontova's diving pals: "We had our thrill, and we got some dynamite steaks." )