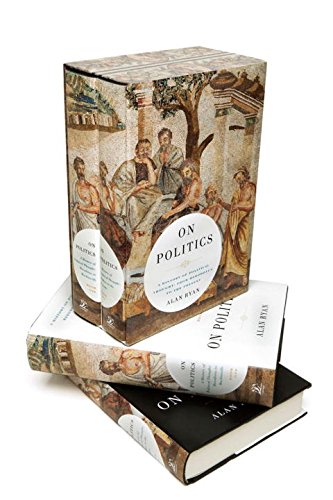 On Politics: A History of Political Thought: From Herodotus to the Present

Book 1: From Herodotus to Machiavelli.

Remarkably detailed yet highly readable, the first volume of this monumental history of political theory covers an enormous span of time and wealth of writings, from Herodotus through Aristotle, the ancient Roman theorists of law, St. Augustine and the medievals, right up to Machiavelli. In tracing the origins of modern conceptions of the political, Ryan (John Dewey and the High Tide of American Liberalism) a professor of political theory at Princeton University, devotes much attention to the great founding texts, such as Plato's Republic and Cicero's On Duties. However it's Ryan's insistence on the influence that the formation and development of the Roman Catholic papacy had on emerging ideas about the nature and role of the nation state that provides the most valuable and fascinating insights. Admirably, Ryan is not afraid to take strong, almost polemical positions, such as when he argues that Plato, in his writings on justice, merely offers an "antipolitics." Questionable as such a thesis may be, it adds satisfying frisson to otherwise familiar material. In addition, contemporary American politics lurk in the background, as Ryan, in this absorbing and edifying read, regularly reminds us of what modern citizens might gain from a deeper understanding of the roots of today's political ideals and loyalties.

Book 2: From Hobbes to the Present.

This second volume, which itself runs well over 600 pages, covers the turn of the 17th century to the present. Starting with Thomas Hobbes, whom Ryan regards as the father of our modern conceptions of politics, the book ranges through Locke, Rousseau, Hegel, and Marx. In addition, Ryan devotes several chapters to modern movements such as republicanism, imperialism, various strands of socialisms, and fascism. Throughout, Ryan demonstrates a prodigious grasp of the various theories and ideas, and the history and events that fuel and underpin such notions. Again, contemporary American politics constitute the implicit context through which we might judge and apply such ideas. Ryan frequently considers the political ramifications of slavery, and offers nuanced views on the relationship between socialism, liberalism, and the welfare state. He admirably considers the political thought of advocates of violence, such as Franz Fanon and the Islamic nationalism of Sayyid Qutb. To his credit, Ryan approaches the problematic aspects of modern democracy with real concern, even if his commitment to it veers between pragmatic and resigned. Nonetheless, these two volumes constitute a remarkable achievement, one that will be immensely valuable to both students and readers for years to come. (Oct.)