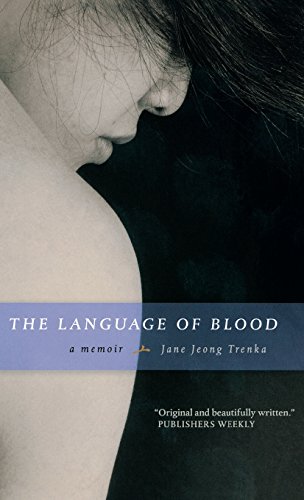 THE LANGUAGE OF BLOOD: A Memoir

Trenka remembers with gross delight headless chickens dancing around until collapse at her adoptive family's farm. She writes, "I wanted my head to be removed, a metaphor so strong that only later did I realize that it was not a death wish at all.... What I longed for was wholeness, for my body to be as white and Northern Minnesotan as my mind." Original and beautifully written reflections like these fill Trenka's memoir, a brave exploration of her identity as a Korean adoptee and pensive young woman trying to negotiate between two mothers and two lives. She traces her life from young, eager-to-please child to questioning adolescent. Once at college, she is stalked by an acquaintance with a sick fascination with her Asian heritage, forcing her to ask important questions about exoticization and violence. Finally, she brings readers with her to Korea, where she is reunited with her birth mother and homeland. Unlike some first-time writers, Trenka is unafraid with her prose and rarely falls into clichés, which is especially admirable given the subject matter. She brazenly dabbles with playwriting, screenwriting, crossword puzzles, myths and dream sequences throughout her account. Her journey, from the conservative Christian roots of rural Minnesota to her cramped and corrupt homeland of Korea, is winding, but it ends at an important place for both reader and writer: transformation. She writes, "I have made it my task to reconstruct the text of a family with context clues, and my intent is... to trust in the mysterious; to juxtapose the known with the unknown; to collect the overlooked."

The Fifth Book of Peace