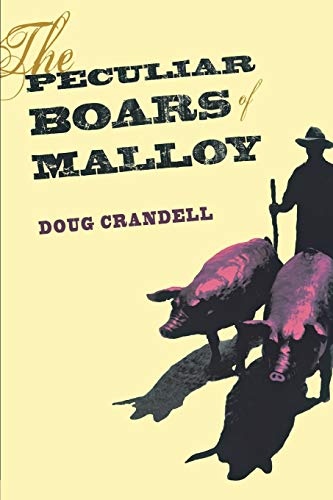 The Peculiar Boars of Malloy

Crandall ( ) goes farmyard farce in this unfortunate tale of two teenaged brothers, their stunted father (left by their wayward mother), and a pair of gay pigs. Indeed, the discovery that the two newly purchased boars prefer each other to the stable of available females is but the latest absurdity in the life of Ronald and Lance’s sad sack father, Gerald Bancroft, a “pint-sized” farmer turned hog breeder who has been the butt of the locals’ jokes since high school. Ronald, the reasonable older son and an aspiring veterinarian, arranges for the hogs’ artificial insemination and tries to keep his angry father from venting his wrath on the boars, but not before news of the “peculiar” animals sweeps the nation, arousing heated demonstrations. Narrated by Lance, the younger, sensitive son who dreams of becoming a pilot, the novel misses no opportunity to skewer Gerald, or even the boys’ mother, who makes an occasional appearance and is, like her ex-husband, a one-dimensional gag. Crandell’s latest effort forgoes empathy or even slightly refined humor in favor of barnyard grunts.