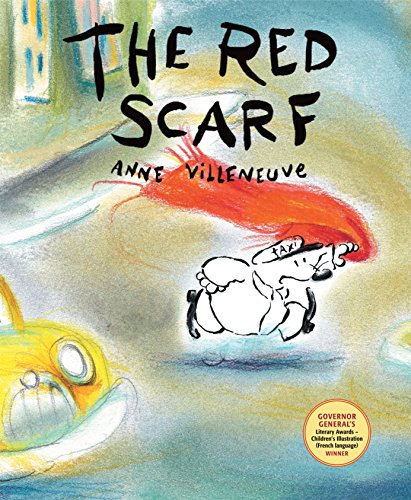 This nearly wordless tale, a gentle slapstick routine, draws attention to a Quebecois illustrator whose work is not well known in the U.S. (Villeneuve’s art for this book won a Governor General’s award when it was first published in French in 1999.) Turpin, a taxi-driving mouse, finds himself in the middle of a circus performance as he tries to return a red scarf to the magician who took his cab to the circus. The protagonist’s Everymouse qualities can be read in his calligraphic ink outlines; he’s always drawn in black and white despite the color that explodes around him. Villeneuve draws the horror, fright, bravery, doubt, embarrassment, and gratification that cross Turpin’s face with a few deft strokes. His mission turns out to be no easy task; he negotiates with a lizard on a unicycle, gets swallowed by a lion, and chases a monkey across a tightrope before finding the magician. Luminous artwork captures the circus’s hot spotlights, and the big red scarf serves as the perfect MacGuffin. Villeneuve’s creation brims with insouciant charm; it’s a lovely addition to a bookshelf. Ages 5–7.