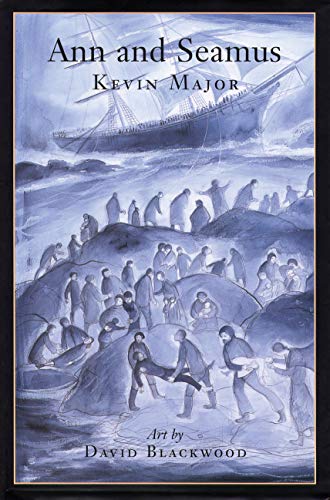 Major ( ) relays this historically based tale of a young Newfoundland woman's heroic role in a real maritime rescue as a series of short poems from two characters' perspectives, Ann and Seamus. In 1828, the Irish immigrant ship , headed for Quebec City, runs aground near a fishing village in the desolate Isle aux Morts, where 17-year-old Ann Harvey lives with her family. Ann has been watching the harsh rhythms of her mother's life ("My mother Jane has too much/ filling her days/ to ever think/ of singing"), and she imagines a different future for herself in another place. When the runs aground, Ann, along with her father and brother, rises to the occasion, rescuing 163 of the passengers (many others died) with only their 12-foot skiff, tossed by rough waters in heavy fog. One rescued passenger, Seamus, who narrates the middle section of the book, also dreams of seeing the world. He feels an instantaneous attraction to Ann, who likewise feels drawn to him. At the end, she must wrestle between the temptation to go off with him and her desire to remain loyal to (and safe with) her family. Blackwood's hauntingly beautiful ice-colored illustrations confer a dignity on the tense, highly dramatic proceedings. Ages 12-up.