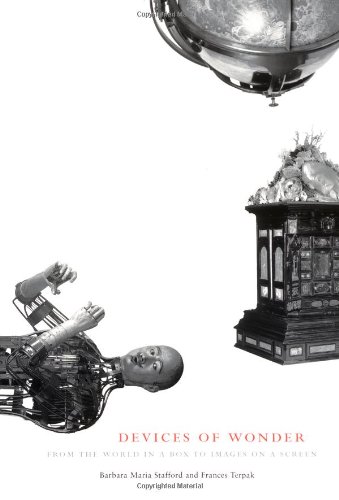 DEVICES OF WONDER: From the World in a Box to Images on a Screen

That historical precursors to modern technology deserve careful investigation is the pretext for this encyclopedic survey of post-Renaissance curios. Stafford, a professor at the University of Chicago, and Terpak, a curator at the Getty Research Institute, say their goal is to find the "ghosts lurking even in state-of-the-art devices" and demonstrate how "media machines... constrain what it is possible to see [and] also determine what can be thought. " But mostly it seems like they just want to chat about weird old gizmos. Take, for instance, the famous Vaucanson duck, a quacking automaton that wowed 18th-century audiences with its seeming ability to swallow, digest and defecate food. (It was later proved a sham.) Or the 18th- and 19th-century "panoramas," immense paintings that surrounded the viewer in three dimensions (in 1794, one naval panorama was so overwhelming that the Queen of England claimed it made her seasick). Stafford and Terpak love all these strange artifacts, even when, as with a complicated kind of German cabinet called the , the subject is less than enthralling. But the authors may have sacrificed tightness to comprehensiveness; there's little sense of connection between the disparate objects. Another problem lies with the book's structure: because Stafford wrote the first half and Terpak the second, there is considerable overlap of material. Add to this the authors' high academic tone, and the result is an informative text that will appeal only to museum-goers and antiquarians with extremely obscure tastes. Color and b&w illus.