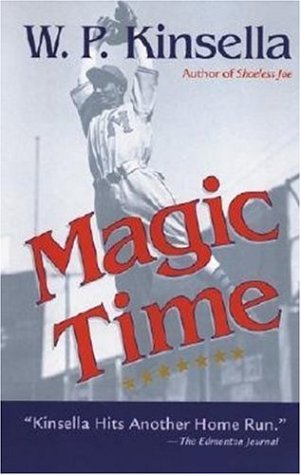 Previously published in Canada and optioned for film by the producer of , this is a warmhearted, homespun novel by the award-winning author of 30 books—including which was made into the Academy Award–nominated Kevin Costner movie . When LSU's phenomenal second baseman Mike Houle turns down a signing bonus from the Montreal Expos in order to complete his senior year and graduate, his performance on the field declines, and he is passed over in the next draft. Desperate for another chance, he accepts his agent's offer to sharpen his skills, playing the next season for Grand Mound, Iowa, in the conspicuously anonymous semipro Cornbelt League. While the semipro circuit pays a modest salary plus room and board with a local sponsor, it also requires the players to work at regular day jobs, usually provided by the local businessmen sponsors. Mike soon discovers that the town is populated by former players who married local girls and stayed on to raise families, and it just so happens that his sponsor has a beautiful daughter. During the preseason, Mike falls for the girl, and the plot thickens when his widower dad comes to see him play and is invited to stay at the home of a comely widow. Is this paradise, or is it an all-too-comfortable prison? Feeling betrayed, Mike takes another offer, but soon finds that the grass is not always greener. This soft lob of a novel doesn't fly quite as high as the author's previous home-run hits, but satisfies with its endearing characters and baseball lore.