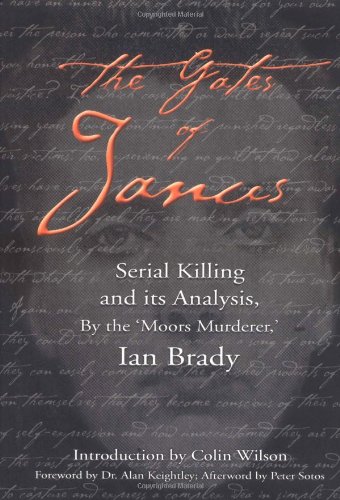 THE GATES OF JANUS: Serial Killing and Its Analysis

The infamous "Moors Murderer," writing from his U.K. jail cell, Brady provides a rambling account of the socio-philosophical and psychological genesis of the modern day serial killer, but it's emphatically "not an apologia." The child pornographer and convicted killer (of 10-year-old Lesley Ann Downey, 12-year-old John Kilbride and others) spends the first half of the book contending that killers such as himself, who are free from societal, religious and moral chains, are able to provide greater insight into the criminal mind than psychiatrists, crime reporters or police. But this argument, in and of itself, is unsurprising, and any logical authority Brady might have been able to build up is undermined by page after page of his nihilistic ranting. Pointing to myriad problems present in overpopulated, self-satisfied, privileged societies, Brady imagines contemporary culture as a breeding ground for serial killers. To prove his point, he attempts psychological profiles of Henry Lee Lucas, John Wayne Gacy, Ted Bundy and other notorious killers. But these chapters are not profiles so much as they are detailed accounts of the gruesome crimes committed. While revisiting such felonies might be enjoyable for the hardcore true crime fan, for most readers the depictions will feel as gratuitous as the heinous crimes they describe. The relentlessly abrasive and controversial social critic Sotos (), an aficionado of murders recorded on audio tape, adds a provocative afterword.