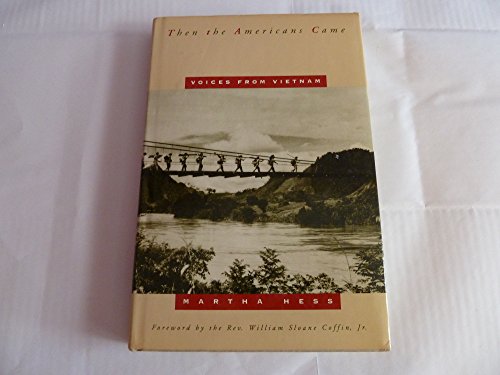 Then the Americans Came: Voices from Vietnam

``In the United States,'' writes the author of this deeply disturbing book, ``while public attention has focused on the American soldier as a victim of `misguided' policy, there seems to be little concern or even curiosity about the people of that faraway land who were the object of our country's apocalyptic wrath.'' Hess traveled the length and breadth of Vietnam in 1990 and 1991, listening to the recollections of men and women who lost family, limbs or sanity--sometimes all of these--during the 1965-1973 war; who witnessed the bombing of schools, hospitals, churches, temples, ferryboats, and animals; who survived beatings, rape and torture, and saw the mass slaughter of civilians by U.S. ground troops. It is difficult to imagine a more powerful indictment of American military conduct in Vietnam than these testimonies (supplemented with photos of many of the speakers) by people who suffered irreparable damage from American weapons and toxic chemicals. One of the victims remarks, ``The Americans cannot repay the debt, because it is too big.'' Hess is a court reporter in New York City. (May)
close
Details