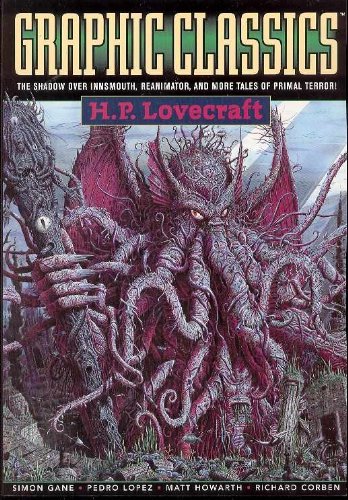 Reanimated corpses, ancient evil and horrors too disturbing to describe? Must be H.P. Lovecraft, master of the creepy. This is an updated and expanded edition of an up-to-now unavailable collection of comics adaptations of the horror master's craft. Lovecraft is a sort of pulpier, purpler Edgar Allan Poe, his stories taking place in a gothic New England landscape. Like all the great spine-tinglers, H.P. likes to leave his monsters up to the imagination, but the works in this collection are fairly dripping with tentacles, specters and monstrous visages. Simon Gane's intense, sometimes overly busy, illustration of "The Shadow Over Innsmouth" portrays Lovecraft's classic beast, Great Cthulu, as a scaly minotaur with a head writhing with suckers. Pedro Lopez's film noiresque vision of "Dreams of the Witch House" has fewer monsters, but still manages to throw in a few tentacles. Even Kevin Atkinson's appropriately cartoonlike illustrations of "Sweet Ermengarde"—one of Lovecraft's few works that doesn't mention monsters at all (other than the human sort)—has creepy crawlies in the wings. Although some of the collection's drawing can be uneven, the whole makes for chilling fun.