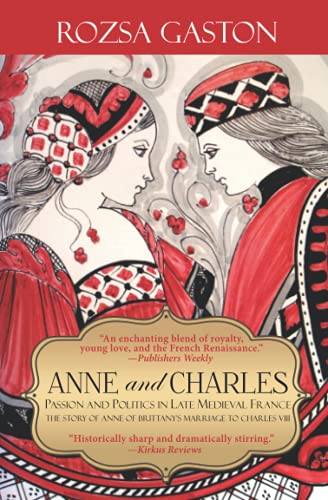 Anne and Charles: Passion and Politics in Late Medieval France

A young, orphaned duchess, whose political marriage with the king of France becomes a loving, productive union, is the center of Gaston’s pleasant first novel in the Anne of Brittany series. In 1488, at age 11, Anne becomes Brittany’s ruler after her father’s accidental death; in a symbolic marriage with a proxy groom, she marries the Holy Roman Emperor in 1490. But with France invading the smaller duchy, Anne, 14, whose marriage to the Holy Roman Emperor has been annulled, agrees to marry the 21-year-old king of France, Charles VIII, as a patriotic move to save Brittany. Anne shrewdly requires privileges for her country in a marriage contract with the smitten king, displaying impressive wisdom and fortitude for her age. She is crowned queen, and her marriage to Charles becomes an amorous, genuine, and (mostly) honest relationship. The marriage results in cultural advancements, particularly to art and architecture, yet it is characterized by tragic misfortunes with their children and problems resulting from Charles’s Italian military campaign. Anne’s legacy is that of an intelligent, beloved, and capable queen, with no shortage of heartache as a mother and a wife, as King Charles was a habitual womanizer. Gaston’s blend of royalty, young love, and the French Renaissance is enchanting. (BookLife)
close
Details